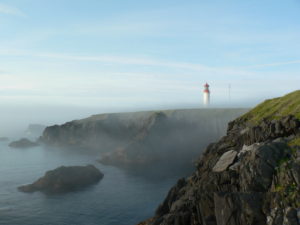 Cape Race has been a world-famous landmark for five centuries, appearing on maps made by European explorers as early as 1502. Before the days of wireless navigational aids and GPS, sailors used the sun and the stars to navigate. When mariners sailing from Europe saw Cape Race, they knew they had made it across the Atlantic and were finally able to verify their positions for the first time in weeks, or sometimes even months.

The name “Cape Race” comes from the Portuguese “Cabo Raso”, which means “Bare Cape”, probably named after the Cabo Raso located across the Atlantic on the coast of Portugal. Another possible translation of the name is “close-shaven”—as by a razor—referring to sailors’ boasts about how close to the Cape they dared to sail in their hurry to get clear of the coast, into open water and “free air”.

As happy as mariners have always been to sight Cape Race, the area also has a tragic history of shipwrecks. Thick fog, ice, hidden rocks and strong currents all contribute to the hazard. Between 1866 and 1904, ninety-four ships were lost at or near Cape Race, with a total loss of over 2000 lives. The first lighthouse was built at Cape Race in 1856, and the present light station went into operation in 1907; the subsequent history of the Cape Race Light and its light keepers is a long and proud one. Look below to read more about the history of the light or learn about the technical details of the lighthouse.

Cape Race was a small but thriving community for many years, as it took quite a few people to run the telegraph, radio and direction-finding stations, and to maintain the lighthouse and fog alarm. There was a school which also served as the church, a staff residence for the marine radio operators, a signal house (used for flag signalling), the light keepers’ homes and worksheds, the Marconi station, and the telegraph office. During the 1940s and 50s, there were over 80 people living out here, with 35 children attending school. There were even enough for a hockey team!

Today, the Cape is home to the Myrick Interpretive Centre, the Cape Race Lighthouse and the Light Keepers who maintain the light station on 28-day shifts all year round. The Principal Light Keeper is Michael Ward of Portugal Cove South. The Principal Assistant Light Keeper is Cliff Doran of Trepassey and the Assistant Light Keepers are Frances Coombs and Richard Hewitt. Environment Canada has a weather station at Cape Race and the Department of National Defense has a refueling pad for Search and Rescue helicopters.

The first beacon at Cape Race was probably a bonfire built by migratory fishermen to alert other ships of their fleet and guide them safely around the dangerous fog-shrouded Cape and into the cod-rich waters of Trepassey Bay. In 1851, the British Admiralty placed an unmanned wooden beacon at Cape Race, but it was not effective, and in 1856 the Admiralty installed the first proper lighthouse at the Cape. It was a 40-foot tower of iron and stone imported from England with a fixed white light provided by thirteen seal-oil lamps with polished metal reflectors. The light went into operation in December, 1856 and could be seen for about 17 nautical miles.

The first Cape Race light keeper was William Halley. He, his wife and his assistant lived in the space between the iron tower and the surrounding stone wall, tormented by wood smoke and wet, icy walls. On Christmas Eve, only ten days after the lighthouse commenced operation, the SS Welsford wrecked on the rocks of Cape Race. Halley and his assistant were able to save four people, while twenty-two drowned. The next year, a comfortable house was built for the light keepers, with a covered walkway to the lighthouse.

In 1886, the responsibility for the management of the Cape Race Light Station was transferred from the British Government to the Canadian Government’s Department of Marine and Fisheries. In 1906 construction began on a new tower built of reinforced concrete, which was then a brand new construction method. At 96 feet high, the new concrete tower was twice the height of the original one and was one of the largest and finest in the world. On October 7, 1907 the new light shone for the first time. The giant hyper-radial lens assembly made by Chance Brothers of Birmingham is the largest of its kind ever built. The steam-whistle foghorn was also replaced by a new fog alarm—a five-inch diaphone operated by a large steam compressor, which could be heard for more than 20 miles.

The old lighthouse was dismantled and moved to Cape North, Nova Scotia in 1907 where it served for over 70 years. It has since been disassembled for the second time and moved to the National Museum of Science and Technology in the middle of Ottawa. It is still there now, with its lamp dimmed and focussed downwards for the benefit of local neighbours and airplanes.

The 1907 Cape Race light was originally lit by a petroleum vapour lamp, like an old-fashioned Coleman lantern with a mantle, and the clockwork mechanism that created the perfectly-timed flashes was moved by a 600-700-pound weight on a cable that hung down the centre of the tower and worked like the weights in a giant grandfather clock. The light keepers had to wind it up every three hours between sunset and sunrise. The system was electrified in 1926 with power supplied by two 50 HP boilers that consumed 500 tons of coal a year. Bringing the coal and other supplies ashore and maintaining the boilers created work for several people and added to the general hustle-bustle of the busy little community on the Cape.

During World War ll, the people who lived at the Cape saw thousands of ships pass by—warships on their way to and from battle and merchant marine convoys supplying the war effort in Europe. Planes flew so low that windows rattled; one bomber out of fuel ditched nearby and was almost recovered before sinking. The sharp-eyed light keepers at Cape Race reported sightings to the Allied Command, but one German U-Boat hiding behind an iceberg was able to hit a passing ship. In spite of many opportunities, the Cape and the light station were never attacked because they were so valued by all navigators.

The tower built in 1907 still stands today and the Cape Race light has been faithfully kept for over 100 years, flashing its brilliant beam of welcome and warning to mariners. It has been the last sight of home for thousands of troops shipping out to Europe and the first sight of a new home for millions of immigrants coming to our shores. A famous landmark in the history of North America, it is still a landfall beacon at the edge of the New World.

The hyper-radial Fresnel lenses were the largest ever actually put into use and were installed in about two dozen major “landfall” beacons around the world. The recipients include Makapu’u Point lighthouse on Oahu Island in Hawaii, Cabo de São Vicente in Portugal, Manora Point in Karachi, Pakistan, the famous Bishop Rock off the coast of Cornwall (in the UK), Cabo de Santa Marta in Brazil and Cape Race, Newfoundland. By the 1920s, high-intensity lamp technology had rendered lenses of this size obsolete.

To keep the correct speed and steadiness, the lens assembly is mounted on a cast iron table floating in a mercury bath. Originally the clockwork mechanism was moved by a 600-700-pound weight on a cable that hung down the centre of the tower and worked like the weights in a giant grandfather clock. The light keepers had to wind it up every three hours between sunset and sunrise. Now the work is done by a 1/4 horsepower electric motor.

The whole lens assembly revolves by clockwork at a rate of one revolution every thirty seconds, to give a flash every 7.5 seconds. This pattern of flashes is used only by this light, so navigators can identify it as the Cape Race light by timing the flashes. The light was originally supplied by a petroleum vapour lamp—that’s like a Coleman lantern, with a mantle. The system was electrified in 1926.